The phenomenon of the peak of Mount Semeru with a hat on, then has attracted the attention of netizens. Many allegations circulate regarding this rare event. However, BNPB Head of Data Information and Public Relations Sutopo Purwo in his Twitter account on Monday explained that the “hat” on Mount Semeru was caused by the altocumulus lenticularis cloud which experienced turbulence on the mountain. 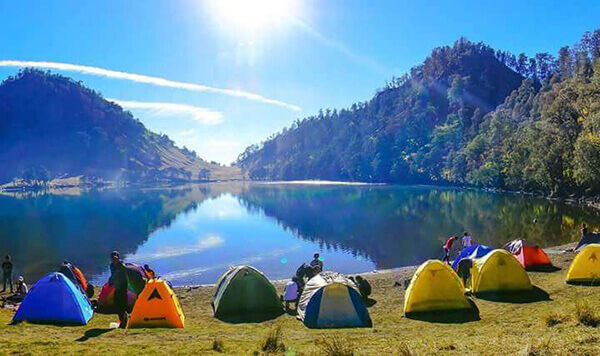 Mount Semeru and Mount Bromo, which are under the management of Bromo Tenger Semeru National Park, always attract attention, whether or not there are unique natural events that accompany them. This mountain is one of the targets for outdoor enthusiasts to visit. Mountain climbers, cultural enthusiasts, to lenskap photography enthusiasts always want to visit Mount Semeru. Here are 4 interesting facts about Mount Semeru and Bromo.

The best time to climb and visit

Head of the Promotion Section of the Lumajang Regency Tourism Office, Yuli Annisa, said the best seasons that tourists can refer to to visit the TNBTS area, especially Bromo and Semeru, are in April and May. Because at that time, the Bromo and Semeru areas were fresh green. In that month, usually plants, such as grass and trees, thrive.It does rain occasionally, but it doesn’t interfere with visiting activities. The rain actually swept away the grass that was exposed to dust.

The weather is relatively hot and the wind feels dry. The grass and trees around the TNBTS area are usually withered. A few months later, to be precise in mid-October, the TNBTS area will experience a wet season or an increase in rainfall will begin. At that time, the Mount Bromo savanna area and the Mount Semeru trekking route will be muddy and tend to be muddy.

The Bromo Tengger Semeru area is one of the best ecotourism destinations in Indonesia. Ecotourism development in Bromo has been an example in community-based tourism development The Ministry of Tourism is very enthusiastic and supports this program. Deputy of Marketing I of the Ministry of Tourism I Gde Pitana stated that this is a form of diversification of tourism products that is good for increasing foreign tourist visits.

According to the International Ecotourism Society, ecotourism is defined as a journey that is responsible for preserving unspoiled areas, maintaining community welfare, and involving interpretation and education. One of the ecotourism that is being developed is in Ngadas Tourism Village, Malang Regency. The Faculty of Tourism, University of Pancasila in collaboration with the University of Westminster has initiated an educational tourism program on community-based ecotourism in this village on 4-10 February 2018.

An old Dutch colonial heritage building on the slopes of Mount Bromo, Probolinggo Regency, East Java, can be an alternative tourism in the area. “Sukapura District is known as a heritage sub-district because there are many ancient buildings from the Dutch colonial era which are still very well preserved,” said Sukapura Sub-district Head Yulius Christian in Probolinggo, November 2017.

Yulius gave an example of the white building of the Sukapura District Head’s official residence, which is a legacy of Dutch colonialism. The building was built in the early 1900s. There is also a former coffee warehouse that was built in 1818. Now the former coffee warehouse building which is still well maintained is occupied by the Sapikerep 1 State Elementary School. In fact, in that SD, there is also an old bench and cupboard from the Dutch dated March 8, 1929.

There is an annual music event in Bromo, namely Jazz Gunung Bromo. This event has been held since 2009 at the open amphitheater of Jiwa Jawa Resort in Wonotoro Village, Sukapura District, Probolinggo. The venue, which is located at an altitude of 2,000 meters above sea level, has a capacity of around 400 spectators. According to the initiator, Sigit Pramono, the open amphitheater is the highest in Indonesia. “Maybe there are other places that are higher, but in the field. Meanwhile, this is a special amphitheater that is made for organizing jazz concerts.