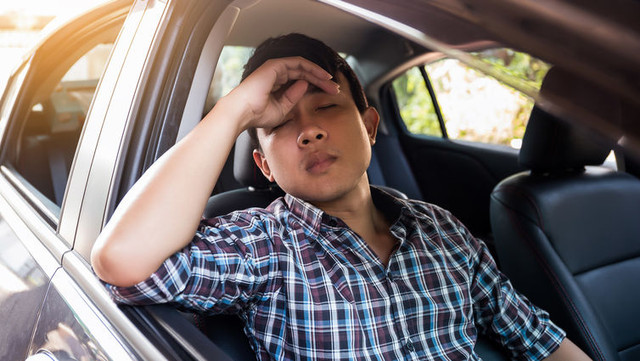 Why do we get nausea, dizziness, and cold sweat to vomit while in a vehicle?

1. Before getting on the vehicle, fill your stomach first (eat). Don’t let the stomach be empty.
2. Take anti-vomiting medication.
3. When riding a vehicle try not to drink soft drinks, eat foods that can trigger nausea (usually each individual has its own trigger factor).
4. When riding a vehicle, position your body as comfortable as possible and avoid reading books or playing on your cellphone. Keep your eyes focused.
5. Position the head in a stable state.
6. Don’t overeat.
7. Consume mint candy and close your eyes to prevent nausea symptoms.
8. If symptoms of nausea, dizziness, and cold sweats appear, close your eyes and start to rest until the attacks subside.
What should be avoided so as not to get motion sickness

Motion sickness is indeed caused by balance disorders, but there are also foods that can cause motion sickness. What are some of them? The following is a list that has been provides:

1. Alcoholic and fizzy drinks.
2. Drinking excessive coffee (the caffeine content keeps the eyes awake and there is tension in the nerves of the head so that headaches can trigger nausea and vomiting).
3. Overeating and being too full can also trigger motion sickness, so don’t be too full.
Many people say that oranges can trigger motion sickness when in medical science they don’t. In fact, because its sour taste can actually overcome nausea to prevent nausea, this is because oranges contain lots of vitamin C. But if consumed in excess on an empty stomach, it can cause stomach acid to increase,

If you are already nauseous, take these steps to relieve it

Do the following simple things to make yourself better when you feel sick in the vehicle:

1. If you are already nauseous, just vomit. Don’t be held back.
2. After vomiting, drink water to prevent dehydration.
3. Eat snacks.
4. Take anti-vomiting drugs.
5. Rest and close your eyes.
6. When the headache has subsided, start opening your eyes slowly and focusing your eyes. Avoid reading books and playing cellphones.
7. To relax your body, stabilize your head and use eucalyptus oil to prevent nausea.
8. Eat mint candy to relieve nausea.

Get drunk while driving?

Motion sickness does not only happen to passengers, but drivers can also feel it. The following are things you can do to avoid motion sickness while driving:

1. If you often get motion sickness while driving, you can take Dramamine or Meklizina anti-hangover drugs which do not have a drowsy effect. If not, you can try Imodium and Pepto-Bismol.
2. Provide gum for a relaxing effect while driving.
3. Provide mint candy to relieve nausea.
4. Open the car window slightly to feel fresh.
5. Bring plastic just in case.